1. Why is the 7th Street Bridge over the Tuolumne River being replaced?

The 7th Street Bridge was built in 1916 and is showing signs of major degradation and aging as reflected in the low bridge sufficiency rating of 5.1 (out of 100) per the most recent Caltrans inspection report. In addition, the bridge is considered scour critical where portions of the bridge supports at the Tuolumne River have been exposed and/or damaged. The new bridge will not only correct the structural deficiencies, but will also address the existing operational inadequacies including the non-ADA compliant sidewalks and inadequate shoulders for bicycles.

2. Who is responsible for the project?

The Stanislaus County Department of Public Works is the lead agency responsible for the project delivery and is supported by the City of Modesto.

3. What is the purpose of the project?

The purpose of the project is to improve vehicular, pedestrian, and bicycle movement and safety across the Tuolumne River along the 7th Street corridor by constructing a new bridge that meets the current roadway, structural, and hydraulic design standards.

4. What will happen to the existing 7th Street Bridge?

The existing substandard cantilevered concrete (“canticrete”) bridge is quickly deteriorating and will be demolished to make room for the new bridge. If feasible, some of the historical elements of the bridge, including the concrete lions, will be salvaged and restored as part of the environmental mitigation measures.

The new bridge will consist of 8 total spans totaling 1,238 feet in length. It will be an arched cast-in-place prestressed concrete box girder bridge to honor and respect the existing historic arched bridge. 6. How many lanes will be on the new bridge?

The bridge will carry two lanes in each direction to accommodate the increased traffic demands. It will also include a raised sidewalk on the east side and a separated bicycle/pedestrian walkway on the west side.

7. What can I expect during construction and how long will it take to complete?

Construction is anticipated to start in 2023 or 2024 pending federal funding availability. Construction is expected to last two years and will require a full closure of 7th Street from Tuolumne Boulevard to Crows Landing Road. Traffic will be detoured via SR-99 and 9th Street. Pedestrian access will be maintained through the park via a temporary pedestrian bridge over the river. See below for the detour plan. 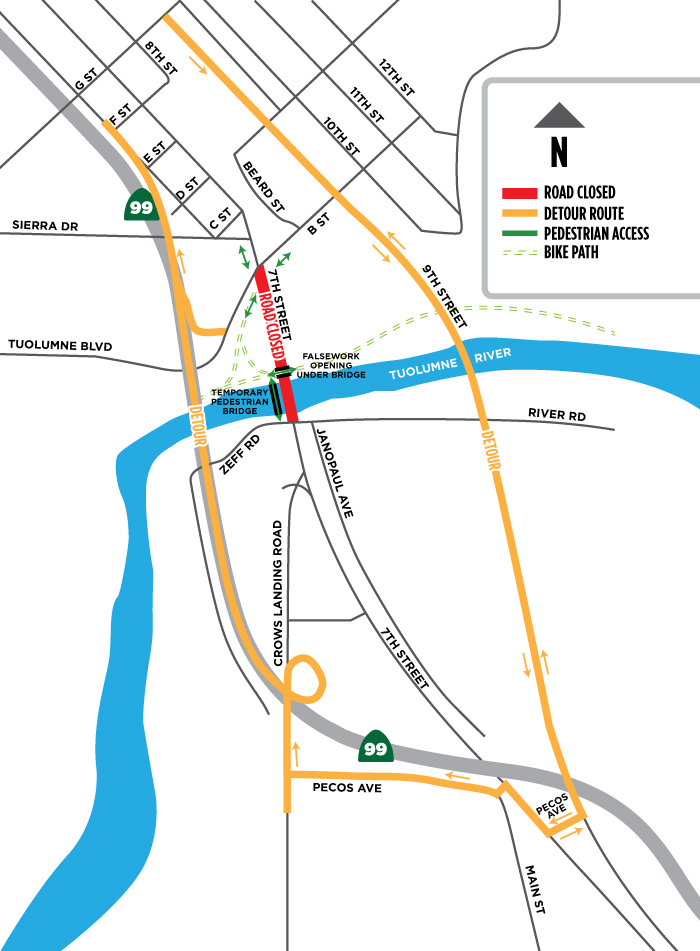 8. Will the park remain open during construction?

Portions of the park adjacent to the bridge will be closed to the public during construction. However, a temporary pedestrian bridge within the park will be constructed over the river to maintain pedestrian access for the surrounding community.

9. How can I get involved and stay updated?

The County believes that a strong community involvement is the key to a successful project. For updates, questions, or concerns, please complete the feedback form, call the project hotline at 1-800-229-8553, or email dan@portcitymarketing.com.

All four lions are important to the community and will be saved. The plan for now is that two will go in the historical plaza and two are slated for preservation at the new downtown courthouse.